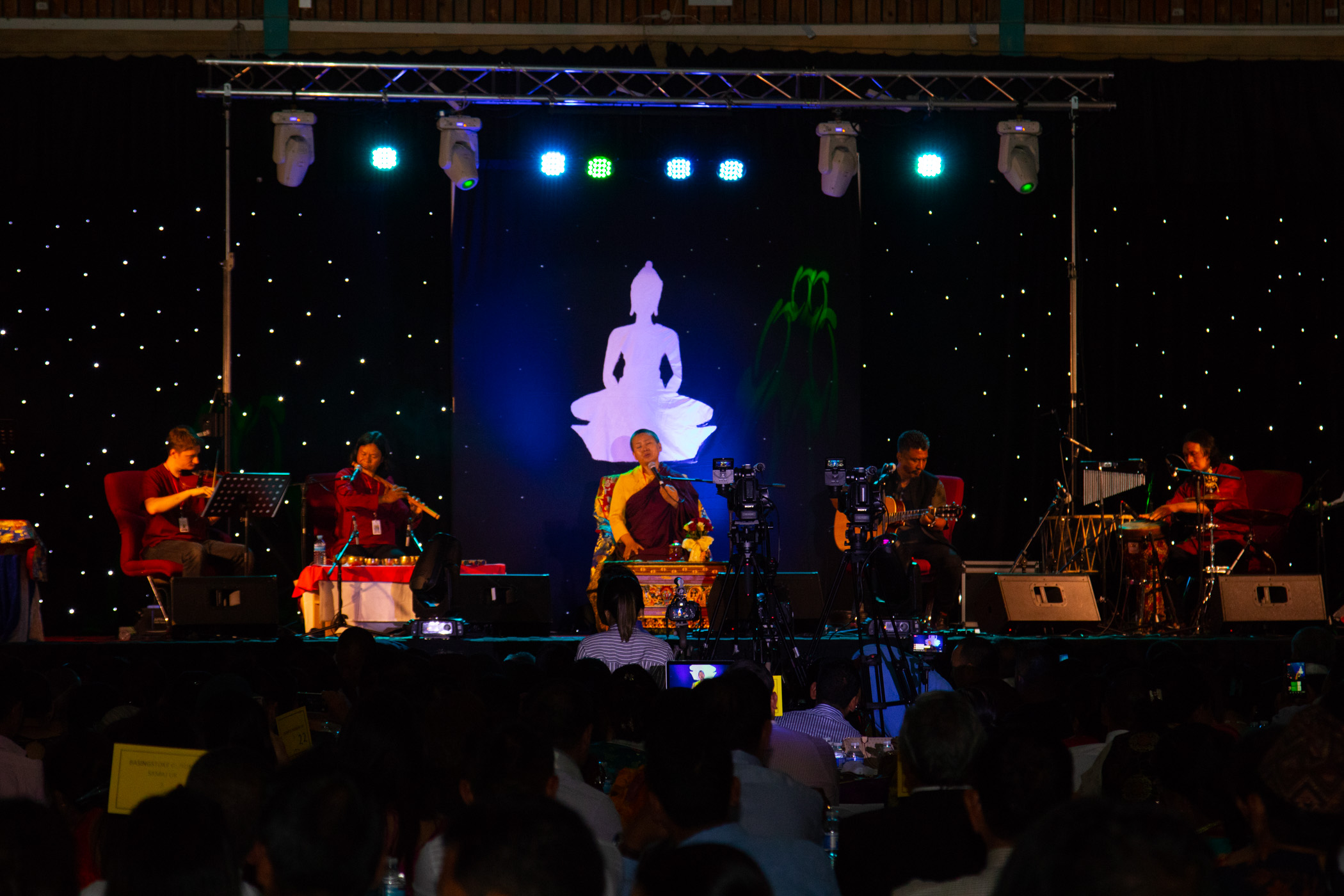 A charity dinner was organised by the Buddhist Gumba Reading on 07/07/2019 at Rivermead Leisure Complex, Reading to raise funds for acquiring it’s own Monastery (GUMBA) in Reading UK.

The event was attended by over 700 guests and managed to raise £45,000. The main guest of the event was Matt Rodda the MP for Reading East, and the highlights of the event was Ani Choying Dolma who is a Nepalese nun and a popular Singer. She is known not only in Nepal but throughout the world for singing many Buddhist chants and feast songs. Ani is a Compassionate advocate who was previously appointed as the UNICEF Goodwill Ambassador to Nepal.

The popular nun entertained the audience by singing her hit songs including popular and well known song FULKO AAKHAMA FULAI SANSARA. The hall was completely silence when she sang her song AAMA, (mother) because you could hear a pin drop. Ani choying was accompanied  by a popular music composer and singer Nhyoo Bajracharya, Raman Maharjan, Sundar Maharjan, Prince Maharjan and Sam. The Nepal Idol judge Nhyoo Bajracharya also sang a few of his songs to entertain the audience.

The charity was coordinated by the vice president of the BGR Krishna Gurung, under the chairmanship of retired inspector Khem Gurung and the program was ran by the general secretary of the BGR Kamal Gurung.

The number of Nepalese people settled in the UK has increased significantly since the change of immigration rules pertaining  the ex-Gurkhas.

Reading is a very diverse town with many places to worship such as  Gurdwara, Mosque, Synagogue, Temple, Kingdom Halls and churches with the exception of a proper Gumbas for  Nyingmapa traditional Buddhism. A majority of the deaths and post-death rituals for the Gurung Buddhist are performed according to Nyingma tradition. There has been a problem of finding a qualified Lama that possess the necessary  knowledge of the Gurung culture and tradition as people have started to pass away. As a result, there have been instances where the body had to repatriate back to Nepal because there was no qualified Lama to perform the traditional rituals for Gurungs death/burial and post death rituals (Argum) The BGR was formed on 21st April 2018 in Reading and registered with the charity commission exactly two months later on 21st June 2018 in order to be able to address this void in the community.

The committee felt that it would be more viable to either build or purchase a property for a Gumba by finding a qualified Lama to perform all the  traditional rituals which would be a valuable asset in the local Buddhist Community,

BGR has been working closely with the chairman of the GURUNG (TAMU) LAMA BUDDHIST ASSOCIATION NEPAL, who has kindly agreed to provide a qualified Lamas when necessary so that the rituals can be performed in proper traditional manner. The BGR has been running a variety of creative and productive activities to interact with and to educate about  Budhdhist Philosophy, while simultaneously extending a cordial relationship to other communities in the UK. So far, £200,000 has been raised while the committee is actively working to find a suitable and affordable property to practice worshiping. The centre will be open to the general public once the Gumba is ready.

Special thanks to the committee for playing a vital role in achieving this success. Big KUDOS to you all!